From the Whittier School to Berkeley Arts Magnet… 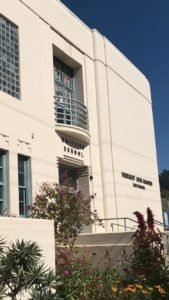 Whittier, one of the City’s original schools, was built as a six-room school house in 1892 with funds from the City’s first school bond. The original architect was A.H. Broad and first principal was Miss Juliet H. Lumbard. The original property was smaller than the present site.

By 1900 there were approximately 257 students at Whittier School.  In 1908 S.D. Waterman, one of the first superintendents, resigned as superintendent in order to become the principal of Whittier School. By 1926 there were three buildings and a total of 19 classrooms, with 390 students enrolled. In 1939 the original buildings were demolished and a new building constructed. The school was designed by Dragon, Schmidts, Hardman and Officer Associated Architects. The school was sometimes called the Whittier-University School after the old University Elementary School (1414 Walnut) was abandoned as an elementary school and the students were sent to Whittier School.

In 1984, Whittier School was closed and in 1985 the Arts Magnet program moved from the Longfellow Annex to the Whittier Campus.

(the following includes portions from Ruperto Gopez and Carole Onos BAM School History; originally printed in the 1991-92 school directory as BAM’s His & Her Story)

The history of Berkeley Arts Magnet School parallels the alternative school movement in California. Alternative education that began in Berkeley during the 1960s as one aspect of the more general questioning of the values, mores, and validity of the existing traditional educational system, which did not include alternative learning and teaching styles.

BAM was created in the early 1970’s when the Berkeley Unified School District was given approximately $6 million for an Experimental Schools Program. Out of 24 alternative programs funded, three remained viable and effective through the spring of 1977. These were the Early Learning Center (preschool-3), Kilimanjaro (4-6), and Odyssey (7-9).

In 1977 the complementary philosophies of these schools were merged to create Berkeley Alternative School, housed on the old Willard Junior High School site. There we remained throughout Willard’s demolition and reconstruction. In 1979, the school was promised a campus of its own. Unfortunately, the school board reneged on this promise.

Parents, staff, and the community demonstrated, lobbied, marched in candlelight processions, and purchased billboards to ensure that alternative education remained an option in our community; even the school band became involved, in performing; at and subsequently being thrown out of a school board meeting. We succeeded in keeping the program intact, although the preschool through sixth grades were moved into shared space at Oxford while seventh, eighth, and ninth grades remained at Willard.

Survival became an annual crisis for Alternative as budgets shrank. Being one of the smallest; (in school population) in Berkeley, we were always one of the first considerations for school closure. Over the years the school has had to depend on grants in order to continue to nurture and develop the arts and humanities program.

Alternative School (preschool eighth grade) was reunited at the Longfellow Annex in 1982 and soon after we were awarded a planning grant from the federal ESAA (Desegregation) program to create an Arts Magnet School, hence the name change. Magnet schools were to create programs where there was a specific area of emphasis, such as art, math, or science, and to plan a program around their emphasis. The school could then act as a magnet, and draw students from anywhere in the district; students could enroll in schools where they were interested in the program and not be bound by neighborhood school zones. In segregated cities, students could enroll in schools across town that might have been previously closed to them. In the end, however, BAM received no Federal Magnet Funds to carry out the program. Even so, staff believed in the value of the arts to enrich, and help develop well rounded people. Berkeley Unified allowed us to keep our new name and to draw students from anywhere in the city. With funding from the California Arts Council, San Francisco Foundation, and California Council of the Humanities, the school moved toward an arts-oriented program and on to the Whittier campus during the 1985-86 school year. The move to Whittier involved sharing our campus with Parent Nursery, Extended Day Care, and Special Education.

In 1987 the junior high program was dropped by the District and we lost our seventh- and eighth-grade classes. The school now enrolled students from tk/kindergarten through fifth grade.

For four and a half years (Winter 1991 & Summer 1995), the Whittier building underwent renovation/modernization and seismic upgrading. Since 1995/1996, some of the temporary portables have been removed, and the grounds have been beautified with our garden projects and Poetry Garden.

Despite our many struggles, despite our many moves, despite that we have always had to share our campus and programs, despite that we have had many different principals over the years, despite that, at times, we have suffered the reputation of a hippie, outcasts, or elitists; school, Berkeley Arts Magnet, an alternative school, has received the Distinguished School Award four times (1989,1993,1997 and 2000)! In 2000, BAM received the California Department of Education’s Excellence in Arts Education in addition to the Distinguished School Award. This continual recognition means that our program works, even though we are not an official magnet nor receive extra funds. The Distinguished Schools awards are given to Berkeley Arts Magnet, and changing our name would in effect erase recognition for these awards. —Ruperto Gopez and Carole Onos, BAM School History; originally printed in the 1991-92 school directory as BAM’s His & Her Story

BAM is no longer an alternative/magnet school and is now one of the 11 elementary schools within the BUSD school zones. Through PTA fundraising, the BAM community has kept a rich arts program alive. Although our school population has increased over the years and we are no longer a magnet school, our philosophy of arts education, multiculturalism, and focus on family atmosphere has not changed. Berkeley Arts Magnet was created with the belief that families make schools successful and that the arts are an integral part of any enriched educational program.